Home Latest news Consumers are worried about plastics in cosmetics. Seventy percent want a ban.
Posted by Madhuri Prabhakar on May 28, 2020May 28, 2020

New app allows consumers to test products for more than 500 types of microplastics.

Amsterdam, 28 May 2020 — Do you know what you’re rubbing on your skin and lips? And whether it can make you sick? The fact is that almost all major cosmetics brands add tiny plastic particles, nanoplastics, or even liquid plastics to their skincare products and make-up. Sometimes they do this to give these products particular properties, but most of the time, they are simply a cheap filler.

Research commissioned by the Dutch environmental organisation the Plastic Soup Foundation which was conducted among more than 3,500 respondents shows that 80% of Dutch people find this worrying.

Consumers think that plastic should be clearly stated

The plastics are included in the list of ingredients on the packaging, but only under their chemical names such as tetrafluoroethylene or methyl methacrylate, and are therefore unrecognisable to most people. As many as 93 percents of the respondents surveyed find this unacceptable. They feel they have the right to know exactly what is in their products.

Furthermore, 88 percent of those questioned think that it should be mandatory for producers to clearly state that their product contains plastic. And 77% feel that ‘hiding’ plastic in the list of ingredients damages their confidence in the cosmetics brand.

Beat the Microbead campaign – ‘power to the people’

The Plastic Soup Foundation, a member of the global movement Break Free From Plastic, has been campaigning against the deliberate addition of plastic to skincare products since 2012. Its Beat the Microbead campaign has resulted in many toothpastes and scrubs finally being microbead-free. The goal is to make all skincare products and cosmetics plastic-free, but until this is the case, consumers should be able to choose whether they want to buy a product with or without plastic.

This is the reason why the Plastic Soup Foundation is releasing the free Beat the Microbead app today which reads the ingredient lists on the packaging and recognises more than 500 different types of microplastics. The user can immediately see whether the scanned product contains microplastics and, if so, which ones.

‘Our patience is running out. In a letter to cosmetics manufacturers and the Dutch and European Parliaments, we — and hundreds of other NGOs — demand transparency about the use of micro, nano, and liquid plastics. And we urge these companies to stop adding them. Until that happens, we are giving consumers a tool to make a conscious choice for themselves. Power to the people!’ 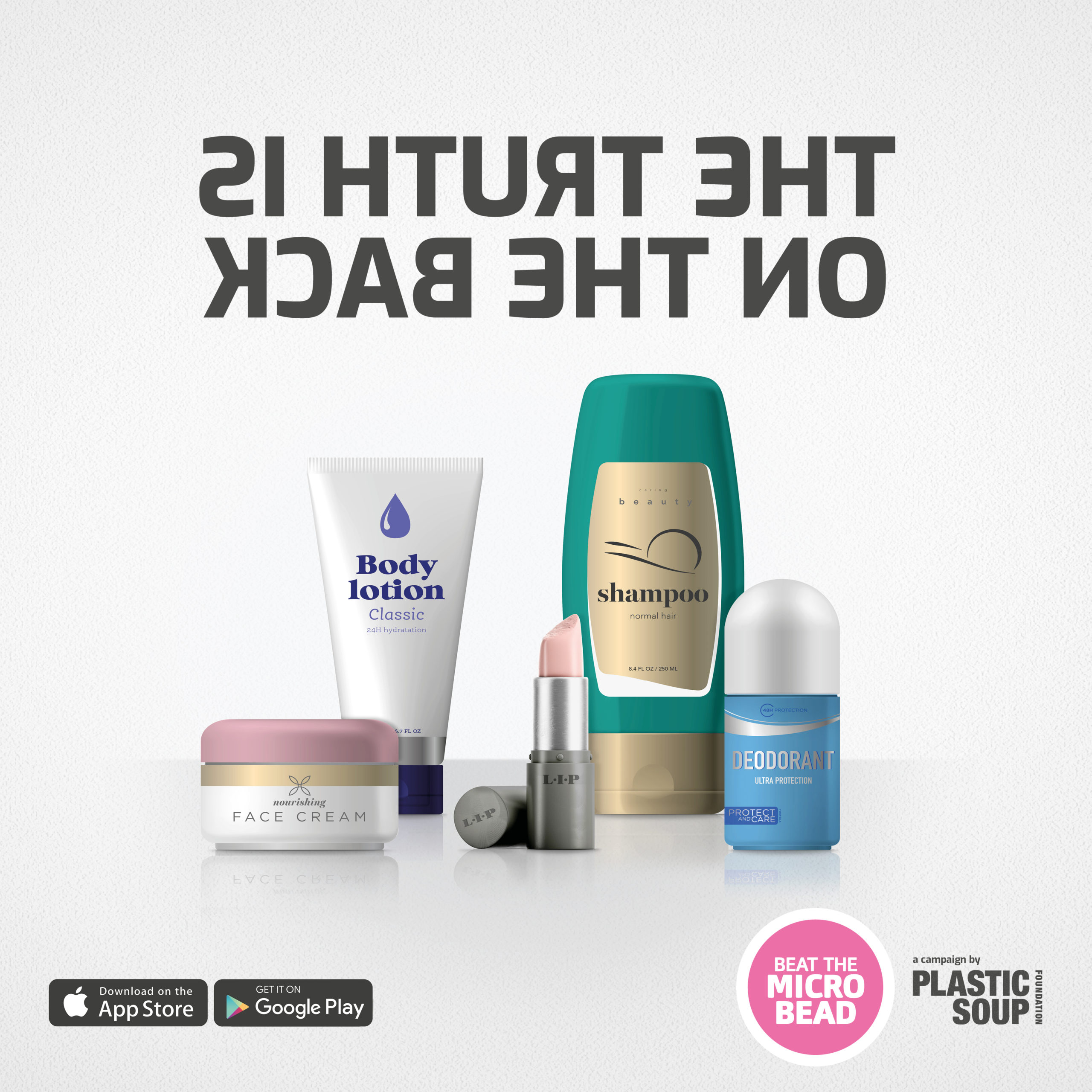 Self-scanning with the new app

The new app is an entirely new version of the previous Beat the Microbead app that was launched in 2012 and that has been downloaded more than 245,000 times worldwide. The latest version is also distributed free of charge by the Plastic Soup Foundation.

The Beat the Microbead app works like a traffic light: red for more than 500 officially recognised microplastics; orange for the so-called sceptical plastics, of which it is not yet proven whether they are dangerous to humans and the environment; and ‘green’ for all products that do not contain ‘red’ or ‘orange’ plastics.

The app also helps find over 70 plastic-free alternative brands. These carry the Plastic Soup Foundation’s ‘Zero Plastic Inside’ certification. The English brand Beauty Kitchen, founded by Jo and Stuart Chidley, is one of them. They say:

‘We are delighted with the launch of this digital tool. It will allow consumers globally to be more aware of the ingredients in their everyday items and encourage them to think more consciously overall regarding the sustainability of the products they are buying. Collectively we can all contribute to the elimination of microplastics from all industries before they eliminate our planet.’

Danger to the environment and health

More and more scientists are concerned about the environmental damage caused by all the microplastics that end up in our rivers and seas via the sewerage system, as well as the health risks for users of plastic skincare products. They are calling for extensive research.

That microplastics are harmful to the environment has often been proven, but little is known about their impact on our health. Can microplastics enter our bodies through our lips and, if so, what are the consequences?

The survey shows that 70 percent of the respondents think that there should be a ban on plastic in care products. Work on this is already underway at the European level. The European Commission has instigated research into the danger of microplastics. And if the EU adopts the proposal to reduce the amount of deliberately added microplastics by at least 85 percent, this would mean that 400,000 tonnes fewer microplastics would end up in the environment in the next 20 years.

Oddly enough, unlike other chemicals, microplastics do not need to be registered before they are distributed on the European market. As a result, little is known about their possible effects.

The industry is strongly opposed to these potential new rules. This is one of the primary reasons for the Plastic Soup Foundation to seek cooperation with partner organisations and, at the same time as launching the new app, it is calling on industry and politics to stop adding microplastics.

‘Microplastics do not belong in our cosmetics. It’s a design failure that is putting our environment and health at risk, and it’s completely unnecessary as there are enough alternatives. This is why the EU has taken the initiative to restrict them, and it is critical that everybody gets behind this process so that it leads to an EU wide ban.’

→ European ban on microplastics must be stricter

→ 3 REASONS TO WORRY ABOUT MICROPLASTICS IN 2020